You are here: Home / History / Pulhams / Building the Fernery

In 1851 William Blake employed a highly-regarded Head Gardener Anthony Parsons. His obituary published in The Gardeners Chronicle of 1881 ³ confirmed his gardening expertise and sound judgement:  he was “successful in originating some fine new varieties of British and other Ferns, one being named in his honour Gymnogramma chrysophylla Parsoni. 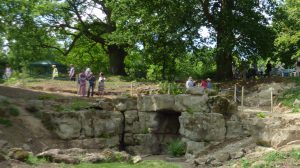 to build a Fernery in an old chalk pit about 500 metres to the East of the House, incorporating Pulhamite artificial rock work.

No papers exist to describe how the Fernery was constructed and then planted, but Pulham’s promotional catalogue of the time confirmed the construction of a ‘cave, dropping well, pass for ferns and other rockplants in an old chalk pit but in artificial stone’.

After the death of Anthony Parsons on Christmas Day 1880, and although still receiving praise in The Gardeners Chronicle of 1881, it is doubted that the Fernery will have continued to be managed on anything like the same scale for the following reasons:

Following the retirement of John Roper, we are delighted to announce that Sara … END_OF_DOCUMENT_TOKEN_TO_BE_REPLACED