A total of 13 volunteers met and carried out weeding of planting beds, nettle strimming, more fencing reparation, and some further excavation which left us with yet more unanswered questions.

We also welcomed two Swedish visitors to the site and gave them a brief introduction.

Strimming and leaf blowing: The site looks nice and tidy. Andy and Tony (D) strimmed the nettles on the Northern slopes before moving to other tasks which included blowing leaves in the general direction of the composting frame. Following our Strategy meeting with WHBC on the 9th November, (reported briefly below) we are hopeful that next year we will be able to improve our system of composting on site, to better manage the soils for the planting beds. We also recognise that we need to purchase, or acquire, at least two wheelbarrows so that volunteers are not left to bring their own.

Sue, Ensa and Alison diligently continued pulling weeds in the planting beds, and Lucy planted a number of Foxgloves on the Southern bank.

As planned, Paul, led a small team trying to locate the special beds that Anthony Parsons developed to bring on his quality ferns. A description of his experimental, and ultimately successful. method of bringing on his choice ferns was published in Alpine Flowers for English Gardens  by William Robinson and published in London by John Murray, Albermarle Street in 1870. (Go to How to grow ferns – 1870 style).

Within that publication, Anthony Parsons himself summarised the basic needs to succeed in growing specimen ferns:

1)     A deep water-tight and root-tight tank, the depth of which may, with advantage, be more than in the case I have described (Ed. read the original article)

Of principle interest was the small bed on the Eastern side of the dell. It was soon found that the outer brick wall was at least 4, and possibly 6 x courses deep – certainly not the depth of an ordinary retaining wall. 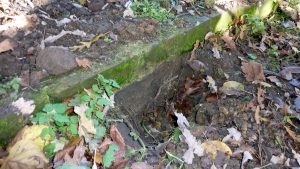 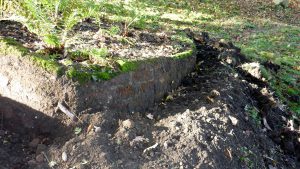 By careful rodding, it was found that the inner of the two interconnecting beds does indeed seem to have a solid base, but we only rodded to approx. 12″ and we have much more careful work to undertake before we can definitely confirm that this bed was one of Anthony Parsons’ ‘specials’. We will now have to look for evidence of a brick and slate-lined base.

For the moment direct excavation of the line of the top path, beyond where we believe the rustic bridge would have been thrown across the gorge, has been suspended because we were failing to find solid evidence of the path we were looking for. Instead, we continued excavating the foundations to see where they would lead us to.

The first photo shows where we left it in October 2017 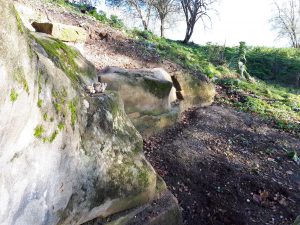 and the second one (below) shows Harry hard at work this month, taking the retaining brick wall further along. 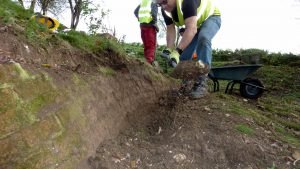 Reinforcements were provided in the shape of Tony (H) and (no longer ‘the new boy’) David and the hard graft, excitement levels, and noise, continued onwards and upwards. 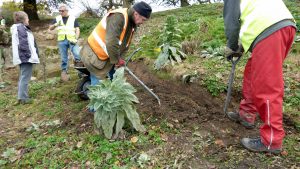 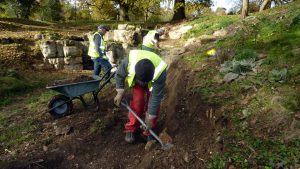 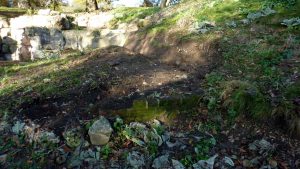 We discovered that the brick retaining wall did link up with the planting bed near the zig-zags, but that the base of the retaining wall seems to be sitting on a solid and sloping concrete base that runs down the slope underneath what we had thought was a planting bed. We now have to discover if the sloping concrete base runs the full depth of the so-called bed, and also if it runs the length  of the path leading to the zig-zag walls at the North end. And then, just as time and energy was running out, a new brick structure was uncovered which connects directly to the zig-zag walls on a fascinating curve yet to be excavated.

Next meeting, or perhaps in the New Year, we will have to consider how far we start excavating the flat area behind the zig-zag walls to see how/if all these walls connect. We anticipate more discoveries. 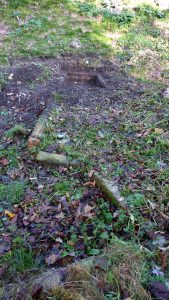 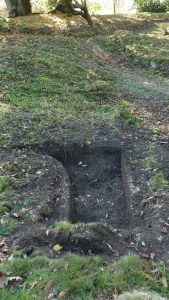 Stephen bolted a couple more fencing panels together, and the perimeter shape of the Fernery Enclosure becomes clearer with every new panel re-installed.

Andrew checked all the keys and found them to be working properly.

The Committee have yet to agree with the WHBC the priority and timescale for the next stage. Research is needed to try to establish what the entrance might have looked like before making major decisions. 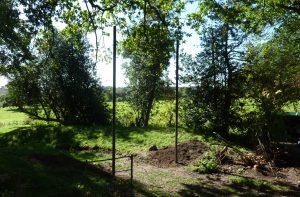 To supplement our toolbox we have purchased 2 x sets of trowels and hand forks , which will be needed once our Saturday Gardening Group gets established.

But please, have a look in your sheds and greenhouses, to see if you have spare tools that you might  donate to the FOD.

A productive meeting was held with Ann MacDonald and Chris James at Campus East. Attending for the Friends were John Roper, Sue Stephens and Andrew Beattie.

As soon as the drafts are agreed we will publish a Report of the meeting.

Apart from appearing under the Calendar Tab on this website, all meetings are now published in the Welwyn Magazine, conveniently in the Dates for Your Diary column on the back page.

The inaugural meeting of the Friends of the Saturday Garden Group held on November 4th was unfortunately rained off.

But with patience we look to a positive response to the next meeting on Saturday 2nd December, but we have to be mindful of the practical difficulties of establishing a new routine so close to Christmas and it is possible that we will not get going until the Spring of 2018.

At the 9th November Strategy Meeting with the WHBC, we were assured that in April 2018 the Borough will purchase some 600 plants which we must plan to plant as a team, under the guidance of a Garden Designer. The 9th November Meeting will be separately reported as soon as the draft notes are agreed.

This is your last reminder that in December we meet exceptionally on the Second Thursday 14th December. Why not invite your family and friends to join us?

The more the merrier the celebrations.

Please bring just a few goodies with you to share.

Lucy has been very busy posting many beautiful new photos taken at our Working Party on the 16th November 2017 .

Please visit the site and record your ‘likes’…

Following the retirement of John Roper, we are delighted to announce that Sara … END_OF_DOCUMENT_TOKEN_TO_BE_REPLACED