On a beautiful sunny day 13 volunteers turned out at the Danesbury Fernery. A very busy morning was spent working on several fronts.

Iron Fencing – Progress Report
The iron estate fencing that we have been restoring was partly re-aligned this morning based on new data we had gathered. The inner estate fencing will eventually form a curving shape all round the Fernery garden, within the outer cattle fence.
Fern Beds – maintenance
We continued to weed the Fern beds that have been planted. The Ferns have benefited from recent rains.
Strimming
We left the nettles alone this month and just strimmed some of the grassy banks. We have decided that we will in future strim these back more regularly in order to keep the site in a tidier condition, and to facilitate the discovery of more stonework, which is a current priority.
Getting things straightened out.
With mechanical help the two seriously bent iron poles either side of the entrance were removed this morning after 157 solid years in the ground. They have now been taken away by the blacksmith who over the next few weeks will straighten them under heat, preparatory to reconstructing the original archway. 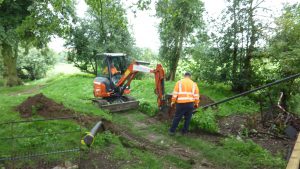 It was harder than expected getting them out because the Victorians had dug large holes, lined them with solid red brick walls, before filling them in with concrete. We have left the holes as complete as possible so that we can make use of the Victorians’ resourcefulness when the poles are returned from the blacksmith for re-installation.
Finding Our Steps – Report on excavation work
We knew there were steps leading down to the bottom of the dell, and we believe we have now found where they are. A volunteer from Birmingham joined us for the day and with a volunteer from the Friends of Mardley Heath, together they carefully scraped away and began to expose steps which we know will lead down from one of the paths – but from which path? 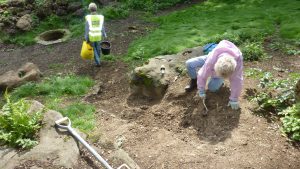 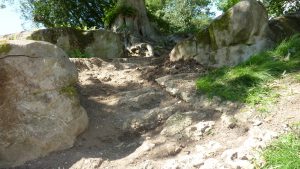 Understanding how the Beds Drained
Pulhamite artificial rock work had drainage channels built into it during construction in 1859/60. But without any plans of the site we don’t know where they are, nor do we know how the water was circulated.
Somehow, when the water reached the bottom of the dropping well, the Victorians found a way of getting back up to the top! 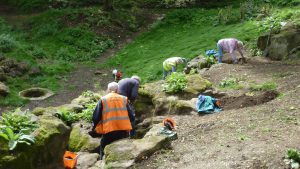 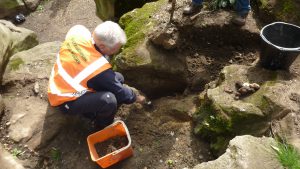 Facebook
A reminder, this Report and much more is now to be found on @danesbury fernery The Facebook Report of the work of the 17th August includes a photo of the work undertaken to expose some decorated stonework that we believe might have been either a feature at the base of the rustic bridge over the gorge, or indeed the base of important steps yet to be found.
John Roper
07910 311589 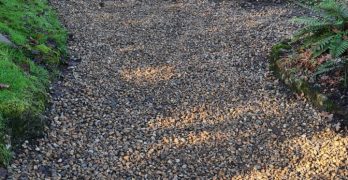 Editorial Note: The following notes were kindly offered by Henry McIntosh when … END_OF_DOCUMENT_TOKEN_TO_BE_REPLACED 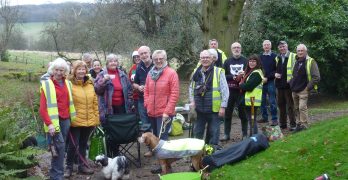 A group of 18 volunteers, including the retired Manager of the Borough Landscape … END_OF_DOCUMENT_TOKEN_TO_BE_REPLACED