We had an excellent turnout of 12 volunteers, plus Chris James from WHBC.

The winds were always high, at about 45 mph, but the dell provides good protection. Hilary was busy watering before the rain started in a short but heavy burst, conveniently at the moment we took our elevenses break. The volunteers were well protected by the oak tree at Fernery HQ and the rain stopped as soon as we were ready to continue.

The main activity on site was the re-profiling of the Parsons Bed, undertaken by Mark of Maydencroft with his mechanical digger, under Sarah’s watchful eye. Harry and Alan had to work to clear the branches of the Laurel Tree on the Southern path which had split in the high winds and were blocking the path that Mark needed to bring his digger round.

During the re-profiling of the Parsons Bed, it was decided to merge it into the lower drop of the Gorge, making one large bed. Sarah plans to plant up the Gorge with bluebells and other light coloured plants to give the effect of a water drop.

Record photographs were taken of the wall at the southern end of the original bed which has now been covered.

Harry, Alan and Colin worked to place rabbit wire around new plants that Sarah had brought to the site, including two specimen Hydrangeas that Hilary and Harry had been carefully storing at their home. Other plants around the site needed repair and improvements to the existing wire protection. 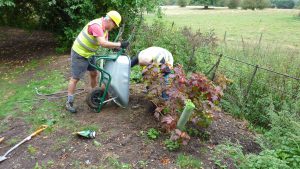 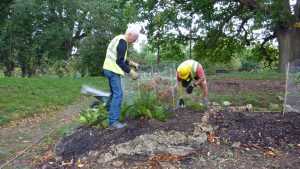 Branches from the fallen Laurel were cut and loaded into the composting bins, and plants brought along by Sarah were planted in the bank above the Top Path. This was hard work for Sara, Nina and Jenny, as the ground at that point had never previously been cultivated and was hard as the rock underneath. 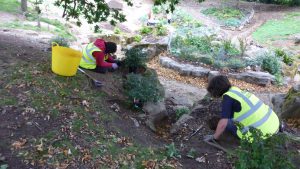 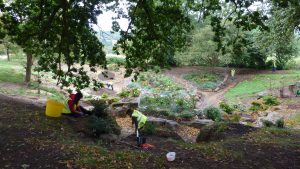 These new bedding areas on the Top Path will require careful watering attention.

In the May Bed, Sarah has sown Hollyhock seeds, and these are beginning to show. Care will need to be taken by gardeners not to weed these new plants as they develop.

The team worked so hard. Once again we were having an Open Day on Thursday … END_OF_DOCUMENT_TOKEN_TO_BE_REPLACED

Sara, our new Chair, has held a Planning meeting and the FODF Committee are all … END_OF_DOCUMENT_TOKEN_TO_BE_REPLACED