Although we aimed to continue the work of the very successful August working party – see Report Work Party 17th August 2017. this was an extra-ordinary meeting as we had two one-off events scheduled at the same time, which was a distraction.

We will deal with these first.

Right on time the blacksmith from Essendon returned the two iron poles which had been straightened through the application of heat and a power press. The costs of this project, including the contractors’ (Maydencroft) costs for the initial removal of the poles and their re-installation,  has been entirely funded by the Friends, following a generous private donation. 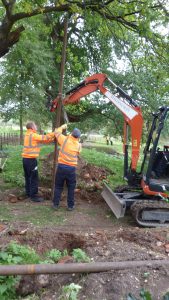 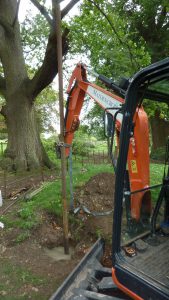 About 1 metre from the right hand pole, Maydencroft’s Richard casually leaned on a steel rod which promptly disappeared into the ground until it hit rock! The following photographs show the red-brick hole on the left from which our entrance poles came, and the one on the right shows the new hole, also lined with brick walls, that nobody has yet explained! It seems that there might have been a far more elaborate iron-work Victorian entrance structure than any of us imagined!

Another Project funded by the Friends reached completion too, or very nearly so. The mains water supply funded by the Borough Council needed protection and the new shed hides a standpipe and tap, to which a hose reel (for plant watering) will ultimately be connected.

The shed is secured to the concrete base and it is planned to store low value hand tools there too, for the convenience of working parties. 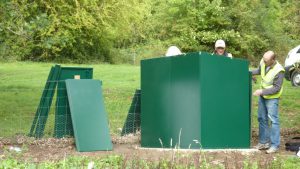 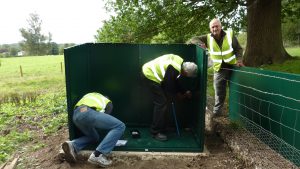 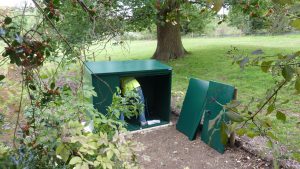 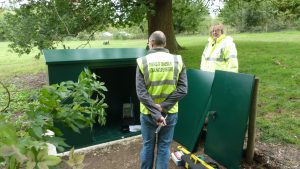 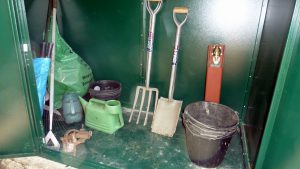 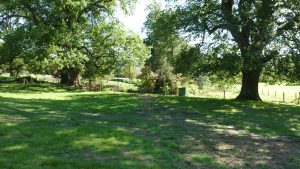 While all that excitement was going on, the work party quietly carried on: weeding some of the Victorian Planting Beds, excavating 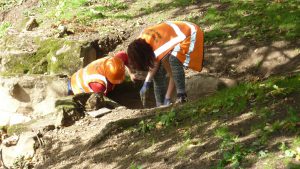 Under Stephen’s direction, John struggled to lift the two fencing panels that were recently discovered by Stephen’s grandson using his plastic metal detector. 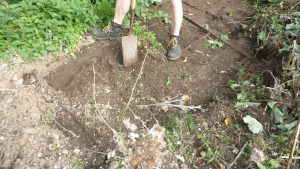 They had been buried under 12″ soil for perhaps 100 years, and John could not photograph this manoeuvre and breath at the same time. Next month we will re-enact this for the family album if Stephen is present.

After some discussion during ‘elevenses’ it was agreed that for a trial period we will meet twice a month as follows:

3rd Thursday each month – Working Party meeting at The Fernery at 10 a.m. as at present.

This Report and all future Reports will now be published on our website www.danesburyfernery.org.uk even though it is still under construction.

Andrew is inviting all Friends to let him know if they would like to be included (i.e. ‘named’) as a member of a Group Application for membership. He has a supply of Application Forms for those who wish to join individually but, as an alternative approach, Friends can join as a collective, but only if they are registered as such in the Group. So please let Andrew Beattie know how you stand on

Date of Next Meeting 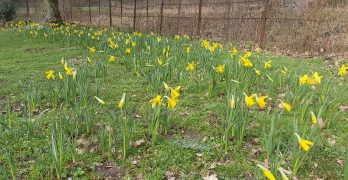 We are reopening the Fernery, but at weekends only, from 9am Saturday to … END_OF_DOCUMENT_TOKEN_TO_BE_REPLACED